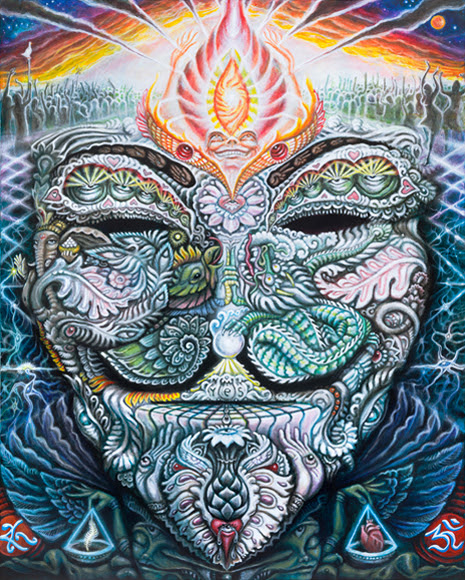 * * *
An explanation of some of the symbolism in the Fawkes painting:


At the bottom we see dual goddesses - this is Ma'at, the winged deity of harmony, justice, and truth. When one dies, so the ancient Egyptians said, their heart is weighed against a single one of her feathers, and having lived a life of integrity, passage is granted to the next world. If the heart is heavier, it is eaten, and it's owner condemned to purgatory.

Those old Egyptians had a pretty strong moral code (and an understanding that people weren't perfect) so there were ways to atone. Being kind to each other was high up on this karmic list.

On either side of Ma'at are symbols for "Shanti" (peace) and the sacred mantra "Om". 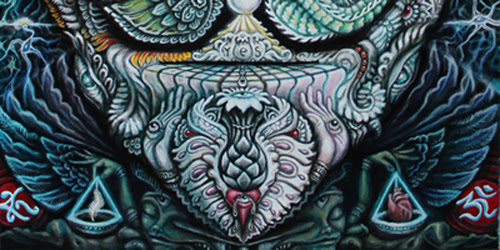 Moving up from the center, we see our living heart, which, having viewed the atrocities of mankind, sheds tears of compassion that flower into (the hands of) action, aided by consciousness blossoming from a pineal seed. Above, the pearl of wisdom dispenses nectar when light is filtered through it - these nectar droplets are distributed through information grids (such as the interweb) to feed the hungry blossoming consciousnesses. The central message of the the nectar is "YES".

In the margins, neurons have begun attaching their synapses to an Akashic matrix. As the little guys attach, they're electrified with the energy of universal interconnectedness. Feeding on the vast grid, they are excited in a new way. More and more neurons (just like the ones in your head) follow suit. A flood of nourishing divine energy into our physical reality begins.

On the left Ganesha, a remover of obstacles, blesses this union of happy neuron and divine matrix with a mudra of protection. In his free hand he offers prasad, tasty sacramental treats for budding boddhisatvas.

Above the eyes of the mask are paisleys, decorated with the beacon-eyes of enlightened teachers, emanating their light of truth. The paisley shape itself is a very old symbol of abundance. 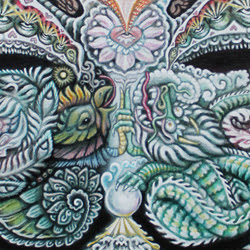 2012 is the year of the dragon, and hopefully, perhaps, a time of rebirth, so in the center we find the phoenix and the dragon. Most of our world's cultures contain some version of both - they're our ancestral symbols, embracing as female/male duality. When pictured together, they are empress & emperor, and mean harmony and complete interdependence. The dragon carries the massive pearl of wisdom, which has the power to multiply anything it touches. The phoenix, as well as rebirth and creation, symbolizes such things as the golden rule, honesty, knowledge, integrity, beauty, and peace. The couple produces from their interwoven hands the pink lotus-heart at the golden ratio point.


Above it all, "The Peacekeeper" throws his hands up in rapture. Having glimpsed his noble destiny, he dons the one true crown. The fierce, owl-like eyes of an angelic denizen of a holy-fire realm can be seen. This alien angel visits and guards him.

He is surrounded by a multitude, enthusiastically on their way, and ragin' it peacefully as they go. They are going to the big party, the moment, the funeral pyre, the bonfire, the Orgasm, the Self, The Festival.
They are listening to very good music.

Through the eyes of fear the group can, sadly, appear like some heathen mob, maybe coming for the castle gate; the eyes of love reveal simply a benevolent celebration.
You are invited.

To those whose hearts cry out for positive revolution, Fawkes's visage can look like potential, participation, real democracy, and inherent human morality. It might look like something we can do right. A grinning buddha. A friend.

The choice and the work is ours. Like Fawkes, out of a violent past we can become something more. The warning is merely that we might wish we did.


* * *
Bless up to Guido Fawkes, and shame on those who tortured him. Bless up to Alan Moore and the groovy shit he channels.
To all brave teachers and all hard workers. To altruistic tricksters.
Bless up to Anonymous & Occupy & all the Love Tribe. May we do our best, and may our best serve the highest good.
Do your best. Smile. Believe in each other.

Give me all kinds of ideas: rr@allofthisisforyou.com